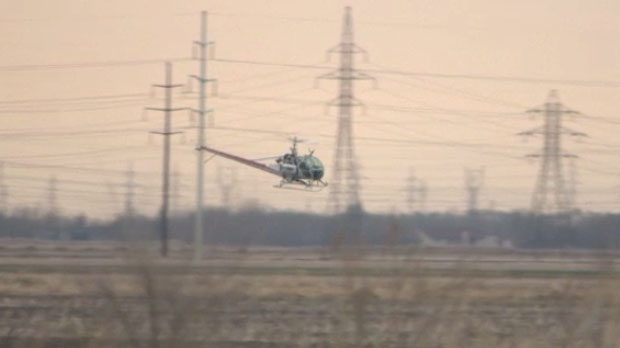 Crews target mosquito larvae in ditches, pools, and containers and kill them before they reach the flying adult, biting stage.

“The rise in spring temperatures has triggered a hatch of the spring species of mosquitoes in the water. If weather conditions continue to remain normal, a routine spring larviciding program is anticipated,” said Ken Nawolsky, the city’s superintendent of insect control.

The city said it will use ground equipment and four helicopters to larvicide and will monitor and treat 28,000 hectares of water area during the program.

When using a helicopter to treat areas where people tend to be present, for example at athletic fields, the city said public access will be restricted, and signage will be posted 24 hours ahead of time to give people notice.

The city said it will start conducting trap counts of adult nuisance mosquitos on April 29, with results to be posted online May 1.

The trap counts are used to determine if and when the city should fog for mosquitoes, according to guidelines. If conditions for fogging are met, the city will use DeltaGard, after making the decision to switch from Malathion in 2017.

People who don’t want the area around their home to be fogged can register as an “anti-pesticide registrant” with the city to be included in a 90-metre buffer zone. Proof of residence is required, the city said, and more information is available online.

The city also encourages residents to tackle standing water on their properties by taking the following steps:

• Drain It! - eavestroughing or unused containers