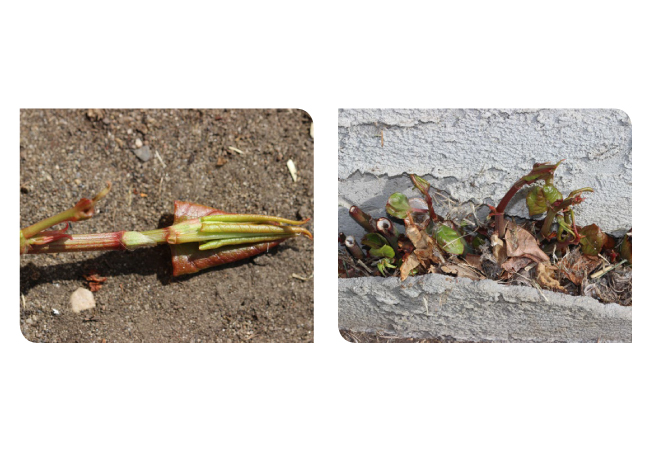 Indigenous to Japan, this perennial was introduced to North America in the 19th century. Japanese knotweed forms dense stands spreading predominantly by extensive rhizomes creating a very persistent and hard-to-kill plant. Small pieces of rhizome can produce new plants very quickly. The species can be found in riparian areas, wetlands, roadsides, utility right of ways and fence lines. This invasive species can grow up to a meter in height in three weeks. There are similar species, including Himalayan, Giant and Bohemian knotweeds. Japanese knotweed is considered to be one of the world’s most invasive plant species.

Stems: Smooth, hollow with purple to red pigmentation. Nodes are solid and surrounded with papery tissue called an ochrea. Stems die back each fall.

Leaves: Alternate with a flat base and pointed tip.

Flowers: Plants are dioecious and can produce small whitegreen flower clusters in late July however seed production is not common in North America.

Why are some weeds more aggressive in their growing habits than others?This course will look at how the Western Provinces categorizes their own list of “Nasty Weeds” and the roles and responsibilities for the Provincial Weed Act within BC, AB, SK and MB. Understanding the biology of the nasty weed provides insight in control tactics for that specific weed. The course will look at how weeds spread from their native country to new areas.

This course looks at identification, biology and control strategies for Jimsonweed, Japanese knotweed, Scentless chamomile, Yellow toadflax and Baby’s breath. We will discuss the threat of the invasive weeds species and the impact on the economy, human health and the environment.