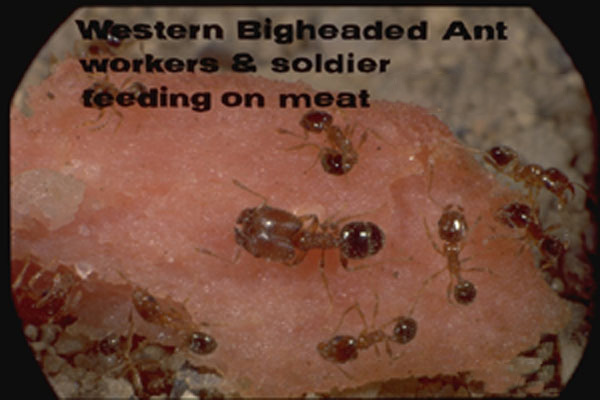 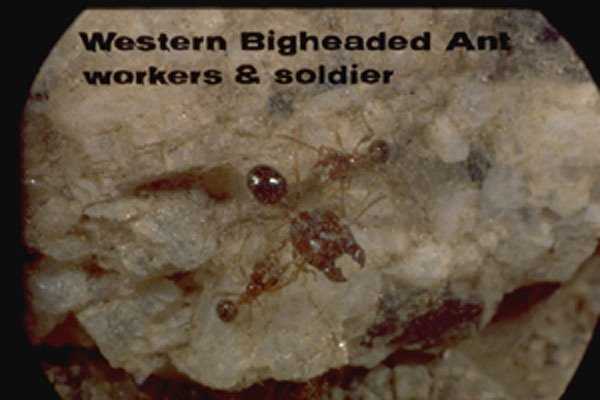 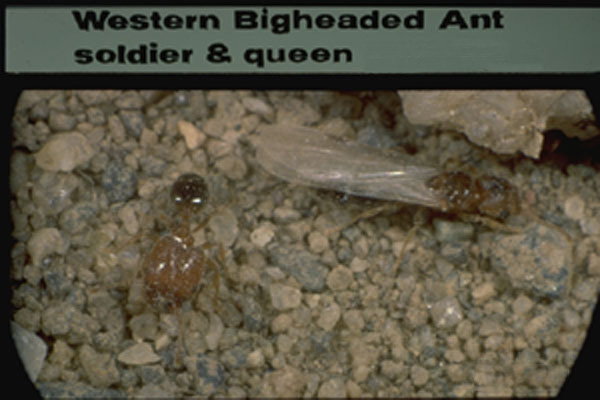 Several species of this genus are native to the southern United States, and they are also a common imported pest problem in Hawaii.

These ants are similar to fire ants in appearance, but may be distinguished by the 12-segmented antennae with a 3-segmented club at the end, as well as by the “major” workers in the colony which have extremely enlarged heads, so large that on occasion they have difficulty walking. Colonies are normally established in the soil, but occasionally invade structures as they forage. Exterior nests are located under debris, logs, rocks, or other objects on the soil, as well as within cavities in rotting wood or old termite galleries. Big-headed ants feed on a variety of materials, both protein and carbohydrate, usually foraging only short distances from their nest in distinct trails, making it easier to locate the nest opening by following a trail back to its source. Protein foods seem to be preferred when these ants are foraging within homes.

This is a double-node ant, with color ranging from light orange-red to darker reddish-brown, depending on the species. This is a polymorphic species, with major and minor workers, and the major workers have heads that are huge in proportion to the rest of the body. The antenna has 12 segments, with the first long segment only half the length of the head, and the final 3 segments forming a terminal club. A pair of spines is located at the back of the thorax.

Along with cleanup of potential food sources both inside and outside the structure, pavement ants are easily controlled by locating the colony and applying a residual dust insecticide into it. Colonies are usually very shallow and found under rocks, wood, or debris, or by following workers back to the nest opening. Bait products also seem to be accepted by the workers and will be effective. Removal of unnecessary debris and materials on the soil will greatly reduce the nesting locations around a structure.