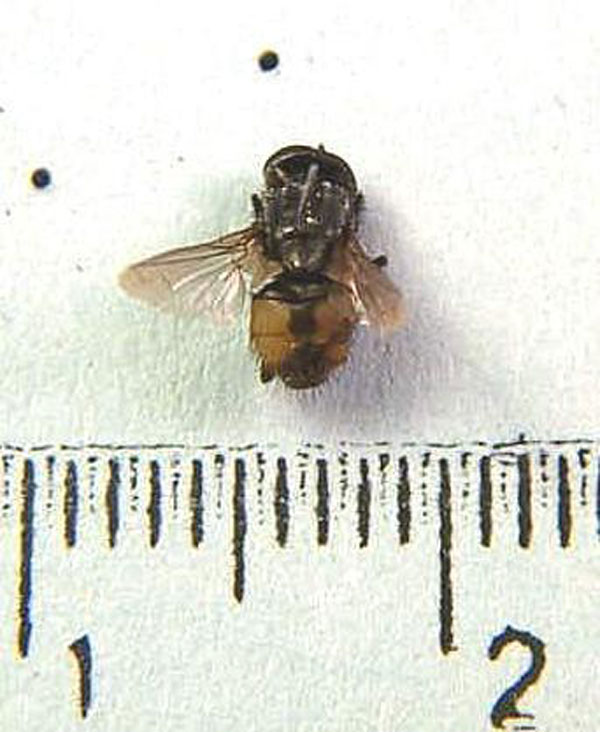 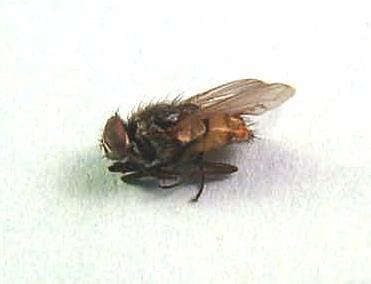 A native of Europe and Asia, this fly is now found throughout North America as well.

The name Face Fly is given due to its common occurrence around livestock areas and its habit of feeding on the mucus and secretions around the eyes, nose, and mouth of horses and cows. Livestock manure is a very common breeding source for the larvae, along with other situations with decomposing organic material. Apparently the larvae favor only undisturbed droppings, and will not live within material that has been piled, removed, or otherwise changed. The adult flies are one of the species of flies that may choose voids within structures for their over-winter quarters, and gather by the many thousands inside the structure, appearing again in the spring as they exit with the warm weather.

This is a very close relative of the House Fly, and is similar in appearance. It is slightly larger and has a shinier black appearance on its thorax. The sides of the abdomen are distinctly dark orange-yellow in color, and a small tuft of bristles is present on each calyptere, the white flanges just behind each wing. Like the House Fly there are 4 longitudinal dark stripes on the top of the thorax.

Elimination of the breeding source of livestock droppings is important for preventing populations to build. Exclusion of the over-wintering adults from structures involves sealing all openings on the exterior of the structure that permit the flies to enter, treatment of the voids they may occupy with a dust insecticide, and treatment of exterior surfaces with a residual insecticide to kill them as they begin to gather on the structure.