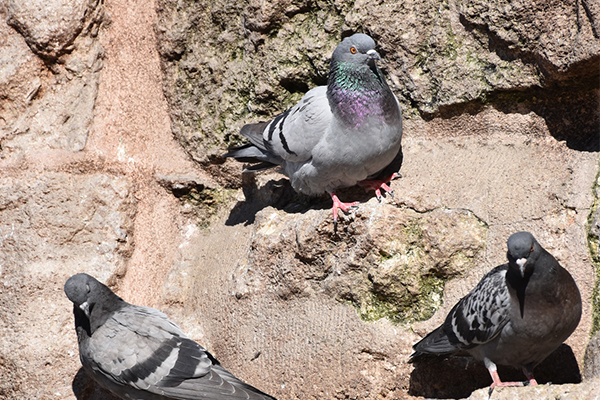 Native to North America, with breeding populations found in every province of Canada and in all of the continental United States.

This is a native bird in North America and is one of the most common species of woodpecker, ranging from Alaska across southern Canada and throughout all of the U.S.

Originally found throughout Europe, Asia, and North Africa, this species was deliberately introduced into the United States in 1890. The most often repeated story is that a bird lover brought in 100 of the birds from Europe with the desire that all species mentioned in Shakespeare’s works would be present in the New World. Starlings have been deliberately introduced into other parts of the world as well, either for aesthetic reasons or in the hope they would be of biological insect control value, which they are not.

This is a native bird in North America. They are a migratory bird that occurs from Alaska to southern Mexico and throughout the entire U.S. and most of Canada. In the northern regions, including Alaska and Canada, they are present only during the summer months, migrating south to the U.S. or Mexico for the winters.

Native to Eurasia and Africa, but due to its ability to live close to humans made its way to Europe, and from there was introduced to the U.S. in 1854 by European settlers who wanted the familiar bird living with them when they emigrated. Now found nearly throughout the world, and the most common sparrow-like bird in many areas of the U.S.

This is a native bird found throughout the entire eastern 2/3 of the U.S. and extreme southern Canada. Its numbers have declined in recent years and its status is classified as Near-Threatened.

Possibly originally native to eastern Asia, and taken to Europe for sporting uses many centuries ago. European immigrants then brought the pigeon to North America in the early 1600’s, where it now is found throughout the U.S and into southern Canada, south throughout Mexico, and essentially worldwide.

These are native birds in North America. The Yellow-bellied sapsucker occurs throughout most of Canada, all of the U.S., and south into Mexico.